I am a firm believer, and have learnt by experience!, that quick fixes don’t work in the long term.  They can have detrimental consequences, including impaired ability to lose weight in the future, due to slower metabolism that persists after years, and reduction in the satiety hormone, leptin.

Weight loss is accompanied by a slowing of resting metabolic rate (RMR). This phenomenon is called “metabolic adaptation” or “adaptive thermogenesis,” and it acts to counter weight loss and is thought to contribute to weight regain. (1)

A study on the Aftermath of “The Biggest Loser” , televised weight loss competition.

Dr. John Douillard whom I follow, recently made reference to this study in one of his articles, and I found it quite interesting .

The study, which was published in the journal, Obesity, recruited 14 of the 16 originally studied “Biggest Loser” competitors and measured RMR and body composition changes 6 years after the end of the weight loss competition. The results are worth looking at if you sometimes are tempted about going on a restrictive, intense weight loss plan. (1)

The study shows how the body responds to a “crash” weight loss plan (or diet to lose weight fast), with metabolic adaptation (slower metabolism) which can persist over time. Our bodies are designed to support fat accumulation more than fat loss, so we have to be very careful when wanting to purposefully lose weight.

Dr. John Douillard also mentions A recent New York Times article, which profiled a handful of the biggest loser contestants and explains that the study found that most of them gained the weight back. Of the contestants studied, 13 of the 14 regained weight in the six years after the competition and 4 contestants actually weighed more than they did before the competition. (2)

Why is it so hard to keep the weight off after losing weight fast?

The study dug into why it is so hard to keep the weight off after a major weight loss event. They found that keeping the weight off had to do with a change in their metabolism. When the contestants started the show, they all had normal metabolisms for their size and weight — but after they had lost all the weight, their metabolism had slowed significantly. With a slower metabolism you cannot burn the calories as fast as you can with a fast metabolism.

It is believed that after a major weight loss, a slower metabolism is normal, but the study shows that the metabolism of the contestants studied stayed slow for a full six years! This was a shocking finding.

It’s also believed that the reason why the change in metabolism persisted for many years after the competition was because of the way that the weight loss happened.  In this competition the contestants endured incredible stress of starvation and exercise, which triggered a more permanent fat-storing, sugar-craving, metabolism-slowing emergency response.

The stress of a crash course diet will trigger an emergency “fight-or-flight” response in our physiology. When the body perceives life as an emergency, as demonstrated in a crash rapid weight loss program, the body will respond by:

Doctor John mentions as an example, one of the contestant’s profiles in the NY Times article, Danny Cahill, weighed in at 430 pounds before the show. After the 7-month show, he weighed in with a record-breaking weight of 191. During the past six years, as hard as he tried, he could not keep the pounds off, and now weighs in at 295. This, according to the research, was due to a persistent slowed metabolism that now burned 800 fewer calories a day than before he started “The Biggest Loser” when he weighed 430.

Effect on Leptin (The Satiety Hormone)

Another interesting factor found in the study, that could also help explain the rapid weight gain for these contestants was Leptin. Leptin is the satiety hormone that tells the body when to stop eating when you are full. Leptin levels in the contestants literally plummeted at the end of the contest. This means that there was no leptin to tell the brain that they were full. In the beginning of the show, they all had normal levels of leptin. By the end of the competition, without any leptin, the brain could not really feel satiated. (1)

The combination of a slow metabolism with low leptin levels is disastrous for our weight maintenance or weight loss efforts, so we must be vigilant when pursuing a weight loss plan.

We might be able to offset the effects of metabolic adaptation by not straining during a weight loss program, and by not putting the body into stress mode. It is important to eat regularly, feel satiated, and not overthink about weight and fat loss.

As this study on “The Biggest Losers” shows, the more you stress and strain the body, the more permanent the damage can be. So, if you are wanting to lose weight fast, you might want to think twice before you go on a “crash course diet”. When you take it slow, weight loss is usually more permanent!

There is only one way to lose unwanted pounds and keep them off- a healthy diet that is individual to your genetics, preferences, state of health and lifestyle. Discover your ideal diet today. Book a Strategy Session ! 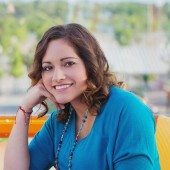 Jimena is a Holistic Weight Loss and Mindset Coach who helps women elevate their relationship with food, and find a sustainable approach to weight loss in body, mind and spirit.

9 Life Changing Strategies To Become Your Own Nutritionist

How To Heal From An Eating Disorder like Anorexia